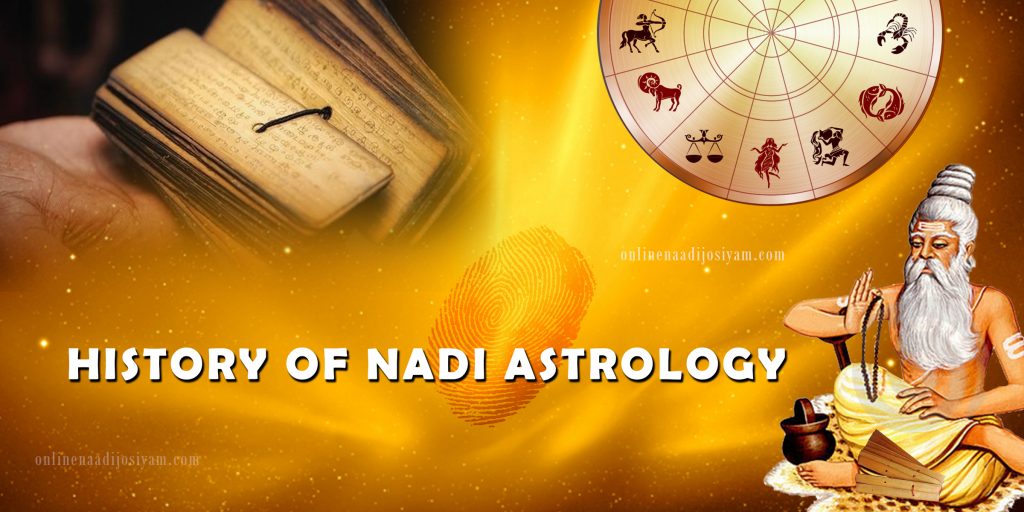 Nadi Astrology (Nadi jyothidam),is a form of Dharma astrology that is used in Tamil Nadu and other Indian regions.

The history and practice of ancient Nadi Astrology began many centuries ago. There were great Sages and Rishis who saw the future. These predictions were made on Palm Leaves Nadi josiyam in a specific script. These leaves are used by Nadi Astrologers to foresee the future of people.

Ancient Indian Rishis used their intellects to discover many arts and sciences that would benefit future generations. Astrology has many branches, including Horoscopy. Casting and reading horoscopes is based on the positions and movements of the planets in the Zodiac. This science is well-developed as proven by ancient texts such as Jathaka, Brihatsamhita, Paarijatha, and so forth.

These leaves were kept in the palace library of Maharajah Serfoji II, Tanjore’s great patron of science and arts. These leaves were later sold to Indian families by the British, who later retrieved them during their reign. They are cared for by these families who continue to teach people how to read the leaves. This is so people can still benefit from the old advice of the Siddhas, Naadi family. These Siddhas are now considered Nadi families. These Siddhas consider themselves to be Nadi families Selvam works in the area of Vaitheeswaran koil.

These leaves were discovered in Tamil Nadu’s South India old Vaitheeswaran Kil around the 12th century. These leaves were found by the Nayanar community, who realized their value and made exact copies. They have been the custodians for the Nadi Leaves ever since. They are the only people who have been trained for generations to interpret the Nadi Leaves and to read them. They are also the only ones who can access the Nadi leaves, and they still follow this traditional nadi astrology. The library was also used by later astrologers, who were keen to learn more about nadiastrology. These palm leaves were written originally on animal skins. Later texts were copied onto palm leaves. These sources were also preserved by using oil made from the blood of peacocks. Vaitheeswaran Koil, in South India, is the primary centre of Nadi Astrology.

The Nadi Jyothidam is a valuable tool that helps you understand the connection between your past birth and your current life. Nadi also has a greater value, as it reveals the ways you can transform the karma from that previous birth. You can be haunted by your past. Your soul’s path was laid out by the Rishis on your Nadi Leaf. They also gave you a list of “solutions” or “course corrections” that will help you get back on track. It is possible to correct and rectify past errors in judgement. This history of Indian astrology.